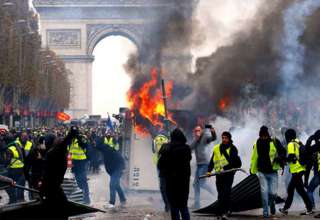 In an attempt to ward off the crisis around the ‘gilets jaunes’, Prime Minister Édouard Philippe made a few long-awaited announcements yesterday. The government first of all ignores the measure that gave rise to the revolt. The increase in the green levy on diesel and petrol in January will be postponed by six months.

In addition to this moratorium, Paris is proposing an increase in tariffs for electricity and gas until after winter. The APK inspection – which had been sharpened to many indignation – becomes smoother again.

Philippe, who has always said he will not give in, had to go through the dust. “You have to be blind and deaf to not hear the protest of recent times,” he said. “Moreover, there is not one fiscal measure worthy of putting the unity of the country at risk.”
Debate

In the coming months, Philippe wants to use ‘a broad social debate’ about tax policy. But, he warned, fewer taxes mean less income and therefore ultimately fewer expenses. A ‘lower tax burden and good services in the more remote areas’ is only possible if the state expenditure is kept under review, according to the prime minister.

The yellow vests are not impressed. They demand not only the immediate and definitive disappearance of the fuel tax – an operation that will cost the treasury about 14 billion euros by 2022. They also want a substantial increase of ‘lower salaries’, the so-called SMIC (minimum wage) and modest pensions. “What is the future of our children?”, An activist asked himself on the BFMTV channel. “They will soon be able to earn 1200 euros and pay 700 euros rent. You can not live like that. ”

The opposition, from left to right, also attacked Philippe and President Macron. “A delay in the increase of the green tax, that really does not make sense,” said Marine Le Pen. “This is only meant to appease the case until next year’s European elections,” says socialist leader Olivier Faure. The most important left-wing leader, Jean-Luc Mélenchon, thinks that ‘the government gets rid of old tricks and has no idea of ​​the lives of ordinary French’.

Some of the yellow vests are determined to demonstrate again in Paris on Saturday. Minister of Internal Affairs Christophe Castaner has asked if they do not want to do that, but at the same time announced that there will be more troops on the side than last week.

In Brussels, developments in France are now followed with suspicion. Due to the expected increase in expenditure, it is again uncertain whether France can meet the standards of the Stability Pact for the euro countries next year. Paris has little room for maneuver – with an expected budget deficit of 2.8 percent of GDP in 2019. If the growth (1.7 percent according to the Insee, the French CBS) disappoints, the limit is quickly reached with extra expenditure. That is why, for example, the economist Philippe Aghion, who worked on the Macron program, advocated temporarily releasing the notorious 3% default for the budget deficit.