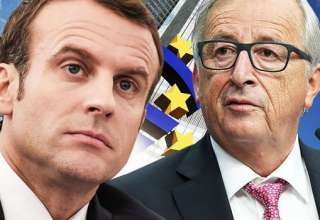 France is considered a bastion of stability amongst European Union countries but Emmanuel Macron is scrambling to quell a growing revolt against his leadership that only threatens to continue into 2019.

The so-called “yellow vest” movement has spawned violent protests across the country since November, forcing French authorities to deploy tens of thousands police officers to quash weekly demonstrations. The largely leaderless, grassroots citizens’ movement emerged in the face of a proposed fuel tax that would have pushed up the price of petrol, hitting many people in rural and suburban areas who depend of cars and have very little access to public transport. But the “yellow vests” have since been joined by thousands more demonstrators concerned about the growing costs of living as French people struggle to make ends meet while Mr Macron, the country’s president, continues to implement business-friendly reforms to the economy.

In a televised address to the nation, Mr Macron announced a £13.4 billion package of concessions including a a rise in the minimum wage in a bid to stave off perhaps the biggest crisis of his 18-month stint as leader.

The movement, however, has since transformed into anti-government intent on displaying discontent in Mr Macron’s leadership.

A shift to the hard-left has seen elements and supporters of far-left leader Jean-Luc Melenchon demanding Citizens’ Initiative Referendums – which means a national referendum would have to be held within a year if 700,000 signatures are gathered across the country.

While there is no clear indication that referendums will be offered to appease the “yellow vests” but moves to alter the 2019 budget have been offered.

This has left European Union bosses on edge after fresh plans to help increase the minimum wage meant the budget would run at a 3.2 percent deficit, instead of the 2.8 percent originally forecast.

The European Commission, the EU’s executive arm, have promised to carefully watch developments in the French budget as politicians attempt to head off the “yellow vest” protests.

The bloc promised to “closely monitor the impact of the announcements made by President Macron on the French deficit and any financing arrangements”.

Pierre Moscovici, the economic affairs commissioner, added: “We are in constant contact with the French authorities.”

The bloc’s strict fiscal rules state that Eurozone members’s spending must not exceed a 3 percent deficit, a rule often flouted by France.

Italy’s prime minister Giuseppe Conte has even suggested the “yellow vest” movement may have help his government’s own struggle against Brussels over its 2019 budget.

The Commission had threatened to fine Italy for its spending plans, which actually run at a lower deficit than Mr Macron’s new plans.

The French protest movement “could have weighed” on Italy’s truce with Brussels “even if that is difficult to quantify,” Mr Conte told Italian newspaper Corriere Della Sera.

The Italian prime minister “explicitly mentioned the revolt of the yellow jackets” in his deficit talks with Mr Moscovici.

The movement also threatens to cause waves during the 2019 European Parliament elections after the French Communist Party announced it plans to feature “yellow jackets” on its list of candidates.

Fabien Roussel, the party’s national secretary, said: “There will be union representatives on the European list but also yellow jackets.

“We cannot go into the European election without taking into account what has happened in the last few weeks.”

A recent IFOP poll revealed that 13 percent of French respondents would vote for a hypothetical “yellow jacket” list in the May 2019 elections.