Home Politics Fatality for Mrs May 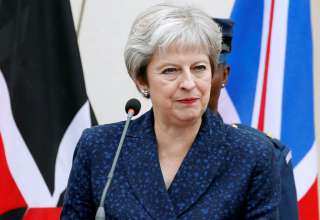 Shanker Singham is ‘frustrated’ by PM’s failure to pursue an independent trade policy.

The man relied on by Brexit supporters to underpin the economic arguments for leaving the EU has said the UK would be better off staying in the club rather than accepting the prime minister’s Brexit plan.

Shanker Singham admitted “there’s no point leaving the EU” because the opportunities he had envisaged will have been lost. “The upside and the opportunity … disappears, and you’re left only with a damage limitation exercise,” he said.

His remarks, made in an interview before the prime minister announced her proposed EU deal, echo those made by the former Brexit secretary Dominic Raab, who on Friday told the BBC’s Today programme that May’s proposal was inferior to EU membership. They follow statements from other senior Brexit-supporting MPs including Iain Duncan Smith and Boris Johnson conceding the same point.

“I’m not going to advocate staying in the EU but if you just presented me terms, this deal or EU membership – we’d effectively be bound by the same rules without a control or voice over them – yes, I think this would be even worse than that,” Raab said.
Singham repeated his concerns in an email on Friday. “From a trade policy perspective this is a worse situation than being in the EU,” he wrote.

Singham is a former Washington trade lawyer and lobbyist who was described by Michael Gove as the UK’s “leading expert on trade deals.” Gove has cited his work in parliament as evidence that Brexit could benefit the entire world and Singham’s proposals for a hard Brexit were applauded by Johnson in a speech to Conservative party conference.

However, his views have been rubbished by other experts and his credentials have been under scrutiny. Singham agreed to be interviewed after the Guardian challenged him over what appeared to be exaggerated descriptions of his academic and professional record.

He has been widely described as an economist though he does not have an academic degree in the subject. A Facebook profile says he studied law and economics at Oxford. However, his degree there was in chemistry and he completed postgraduate law courses at other institutions. Singham said he did create the profile but had not used it for many years.

A biography of Singham distributed by a former employer in the US described his work as “assisting governments in the early privatisations during the Thatcher administration …” and Singham has mentioned his work on privatisations in the 1980s in a public speech.

However, Singham’s career did not begin until 1992, two years after Thatcher left power. Singham denied that this could be misinterpreted and said the privatisation was ongoing in nature. He added that he worked on UK privatisation issues, including relating to water and gas, from 1993 to 1995. He said he had not signed off the former employer’s biography.

“I have worked hard over the last 25 years to build up a career in trade and competition policy that is second to none,” he said.

He said he was “deeply frustrated” by the prime minister’s decision to effectively ignore his proposals. “I see there are huge opportunities and I also see them just disappearing,” he said.

“If the UK is simply a mini version of the EU, then it will be irrelevant to all of these discussions [about trade]. The upside and the opportunity disappears and you’re left only with a damage limitation exercise. As we’ve said repeatedly in the last few months to the government, if this is what you’re going to do, there’s no point leaving the EU. You may as well stay in the EU.”

Singham also criticised the government for suggesting Brexit would be painless and without disruption to the UK’s existing relationships. Similar suggestions have been made by pro-Brexit campaigners.

The government is “constantly suggesting it can be completely frictionless, [that] there can be no costs of disruption, and that’s just not true,” he said. “There will be costs and disruption, but my point is if you do this right, the benefits of an independent trade and domestic regulatory policy will far outweigh any of those costs of disruption.”

Singham is currently director of international trade and competition policy at the Institute of Economic Affairs, a free market thinktank that has attracted controversy for refusing to identify its financial backers.

Earlier this year, Unearthed, an investigations unit set up by Greenpeace, covertly recorded footage which appeared to show the IEA’s chief executive Mark Littlewood offering to arrange meetings with cabinet ministers to potential US donors.

According to the footage, Singham arranged for a businessman and a lobbyist to meet Baker when he was Brexit minister at the IEA’s offices. They also met Jacob Rees-Mogg with Singham at a meeting in parliament of the European Research Group of anti-EU MPs. The IEA says it observes all fundraising rules for charities and has denied any wrongdoing.

Before joining the IEA, Singham worked at another thinktank, the Legatum Institute. He departed after the charity commission required the institute to take down one of his reports on Brexit, which it deemed to have crossed a line into political campaigning.

Singham and the IEA both fiercely deny that their work constitutes lobbying. “If I wanted to just lobby for client interests, then I would have stayed being a partner in a law firm,” Singham said.

While he has many supporters, Singham has critics who say he does not grasp how tough trade negotiations really are. David Henig, a civil servant who worked for seven years until recently as a trade expert for the British government and as an intermediary between the EU and the US, said he thought Singham’s proposals contained “a bit of knowledge and an awful lot of bluster, lots of technical language that doesn’t add up to anything particularly”.

Singham reluctantly voted remain because he thought the disruption caused by departure would be too great. The result of the referendum was, however, “a massive global event”, providing an opportunity to kickstart stalled global free trade talks.

Privately educated at St Paul’s School in London before studying at Balliol College in Oxford, Singham left university with a third class degree in chemistry. His true passion was athletics. “That literally was all I cared about,” he says. “I think if I’d done any subject it would have been the same.” After rupturing both achilles tendons (“my body was not designed to run as fast as I was trying to make it run”) he was forced to rethink his future and alighted on a career in the law.

His main preoccupation is removing regulations that he says are used as barriers to trade, such as some of the EU rules on food safety, chemicals and pharmaceuticals licensing, and caps on financial services. Trade justice campaigners such as Nick Dearden, director of Global Justice Now, have described his proposals as “pure shock doctrine”, outlining a neoliberal agenda to break rules designed to protect the public, privatise welfare services including the NHS and remove post-crash curbs on finance.

Singham sees it differently, arguing that liberalised markets create opportunity and that free trade can restore faith in liberal democracy. “If we can’t say to people ‘we can protect you from competition that is unfair’,” he says, “they will choose a protectionist, populist leader to protect them from everything. That is why they elected Donald Trump, I think. That is why populism in Europe is so strong. And arguably you could say that is part of the reason for the Brexit vote.”