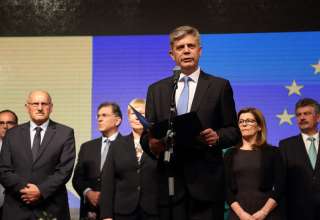 EU diplomats in Bosnia have voiced sympathy for protesters against lawlessness in the Serb entity ruled by Russian darling Milorad Dodik.

The protests were initiated back in March by a man, Davor Dragicevic, who claimed that his son, David, had been murdered by corrupt authorities.

Police in Republika Srpska, the Serb entity in the Bosnian federation, said David had drowned after getting drunk and high on drugs.

“The interior ministry organised the murder … this is a criminal state” with “criminal police”, he said at a rally in October.

The rallies have since expanded into general protests against corruption and poverty in Dodik’s domain.

They erupted into violence in Banja Luka, the Republika Srpska capital, on Tuesday (25 December) after police arrested Dragicevic and his ex-wife.

The events saw one policeman injured and two opposition MPs snatched off the street by anti-riot squads, which also dismantled a makeshift memorial to Dragicevic’s son in the city centre.

It was “striking” that a father’s “search for justice” for his dead child had “mobilised more outcry against lack of rule of law and impunity in BiH [Bosnia] than any political party has managed to do,” the EU embassy in Bosnia and the office of the EU special representative there said the same day.

“Today’s turn of events in Banja Luka sends a negative and alarming signal about the state of rule of law in BiH,” the EU added.

It also called for an “immediate explanation” into the arrest of Davor Dragicevic and the opposition MPs.

The events mark a challenge to the authority of Dodik, who was re-elected as the Serb member of the presidency of Bosnia in October.

Transparency International, a leading NGO, and the Party of Democratic Progress (PDP), the main opposition party in Republika Srpska, also doubled down against the authorities.

They were “repression … against people who are just seeking the truth,” Igor Crnadak, a leading PDP politician, added.

The EU’s support for the protesters, who aim to hold a fresh rally on Wednesday, come amid Dodik’s long-term challenge to Western efforts to maintain stability in the region.
Troublemaker

The 59-year old politician, who enjoys strong support from Moscow, recently renewed calls for Bosnian Serbs to split from the federation.

He also called for Kosovar Serbs to split from Kosovo in comments that risked enflaming tensions in the Western Balkans, in line with Russian efforts to foment instability and prevent EU and Nato expansion in the region.

“It’s logical that the right to self-determination be recognised for Serbs in Republika Srpska”, Dodik said on Monday.

Bosnian Serbs “have the right to it, as should do the Serbs in northern Kosovo,” he said.

Those comments were “a direct attack on the territorial integrity of BiH, the 1995 Dayton Peace Accord [which ended the war there] and with it to peace in the region,” the Bosniak president of the Bosnian federation, Sefik Dzaferovic, said in response.

Bosniaks are Bosnian Muslims who form part of the country alongside the Croatian and Serbian groups who live there.

Zeljko Komsic, the leader of the Croat group, also called for reform in Republika Srpska, saying Dodik’s police should be “put into the service of citizens, not political parties and irresponsible individuals”.

But for Dodik, that meant Komic was “[using] the tragic death of a Banja Luka young man to achieve his political goals”.

The Russian news agency said on Tuesday that Davor Dragicevic had been arrested because he tried to run away from police who had come to take him in for questioning.

The police used “means of force in accordance with the law”, Sputnik said.

One of the opposition MPs from the PDP was arrested at the rally because he had “cut the police tape” and when “the policemen moved to take him”, the other MP “stepped in front of them,” the Russian news agency added.
EU prospects

Bosnia applied to join the EU in 2016 and is currently working on answers to an EU questionnaire on its eligibility.

It has made the slowest progress in its effort to become a member state compared to Albania, Macedonia, Montenegro, and Serbia.

Kosovo has also made slow progress, amid opposition by five EU states who do not recognise its sovereignty.

Opposition was strongest in Finland (64 percent), France (62 percent), and Germany (61 percent), while Spanish people voiced the firmest support on 71 percent.