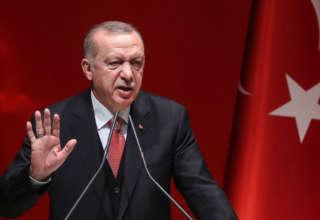 Turkish president Erdogan has warned of the consequences of attacking a Turkish research vessel in the Mediterranean. The Oruc journey there is looking for oil and gas and according to the Turkish leader a ‘high price’ will have to be paid in case of aggression against the ship.

The Turkish search for oil and gas in disputed waters between Crete and Cyprus has caused tension in the region. Greece believes that the Turks are working illegally. France, too, has taken part in the debate and is establishing its military presence in the area. The French and Greek forces have already carried out joint exercises in Crete.

Erdogan suggested that there has already been an incident.

“We have said that in an attack on the Oruc a high price must be paid, ” said the president in Ankara. “They got their first answer on Thursday.” He did not go into detail on what exactly he was referring to.

The Oruc route has a military escort and according to Erdogan remains active in the area at least until 23 August.