Home Politics Dr. Sergey Yakovenko and the bizarre story of an oligarch cloned inside a prostitute’s womb 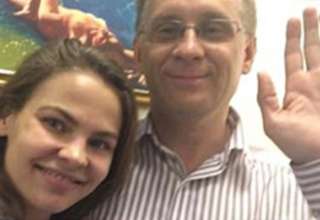 It’s natural for a man to seek extension of his life in sons and daughters. By passing the genes from the best specimens to the next generation the humankind evolved to where it is. But what if the person considers himself already a top in the lineage? Well, Oleg Deripaska has his own reasons to consider it. He isn’t only an aluminum tycoon and friend of one of the best fertility doctors, Sergey Yakovenko. As a boy Oleg was a talented mathematician, a student in an elite math school of USSR. If the later had not collapsed he would be definitely a prominent scientist or a statesman. What if we can copy ourselves and prevent the mistakes our parents or a history itself made?

As for know it isn’t possible. There was some unreliable reports from China, but besides it no credible reports on human cloning were ever published. But if you have a lot of money, a hell lot of money you can dream about it. To have alternative ‘you’ to live beyond your own life. Or for spare parts, you know. One of such stories is outright bizarre and we tell it for what it worth.

Oleg Deripaska wants a clone of himself and the solution of this task is up to a genius MD Sergey Yakovenko. In a book of Nastya Rybka, which served as the basis for the investigation of Alexei Navalny about the joint vacation of Oleg Deripaska and Sergei Prikhodko (one of the highest Russian statesmen, vice-PM) , in addition to the oligarch and a high-ranking official, another hero named Sergey Yakovenko relaxed on a yacht with the girls.

However, in the book, he is most often referred to simply as ‘the Doctor’. According to the description of the Rybka, this is an “intelligent man in a shirt and glasses”, who teaches ‘cell theory’ at Moscow State University and owns several in vitro fertilization (IVF) clinics. In addition, in the book of Nastya Rybka, it is told that the ‘Doctor’ and ‘oligarch’ are working on a human cloning project. This mysterious doctor is Sergey Yakovenko.

In her book, Nastya Rybka mentions an IVF-specialist, S. Yakovenko, not too often, but quite regularly. So, in the book the escort princess, which served as the basis for Navalny’s investigation about the romantic vacation of Oleg Deripaska and Sergey Prikhodko, in addition to the oligarch and an official from the Presidential Administration, another hero named Sergei Yakovenko spent a pleasant time on a yacht with beauties. At the”work”, Nastya Rybka simply called him ‘the Doctor’. The author of the book assures readers that this very “Doctor” and the “oligarch” friend are working on a human cloning project, which can be completed with success faster than anyone could have thought.

So, Oleg Deripaska actually has a fairly close acquaintance with the Doctor who perfectly fits the description. The associate professor of the Department of Biophysics of Moscow State University and the owner of the network of IVF clinics Sergey Yakovenko. The sphere of his scientific interests is profitable enough in our time — embryology and in-vitro fertilization. Surprisingly, back in 2000, the scientist co-authored the chapter on the use of cloning “as a new approach to the treatment of infertility” in the scientific collection “In Vitro fertilization and its new directions in the treatment of female and male infertility”. Evil tongues slander that Mr. Yakovenko is the family doctor of Deripaska for more than a year. If we take into account the specifics of Sergey Yakovenko medical interests, we can say with confidence that Deripaska’s manly capabilities are in good hands.

“I wasn’t on that boat, and I’m not mentioned anywhere. Moreover, the whole news (about the joint vacation of Deripaska and Sergei Prikhodko off the coast of Norway) is made up by 99%, these are false events!”

Ever wondered what the one percent that was true? Drinking tea with bagels and talking about art with the professional prostitutes?

Yakovenko is a doctor on the subject of infertility. And since the country is full of rich matrons of advanced age and steady income, his services are in demand and his importance in the narrow world of oligarchs is great. Yakovenko is the owner of the Altravita IVF clinic network. IVF stands for the implantation of a fertilized egg in the womb of a surrogate mother. Business is mostly legal, so it’s good.

Envious people say that Yakovenko came to this world to clone his friend Deripaska. If so, then so far the success is more than modest, probably because Nastya Rybka has not given the much needed inspiration to the creator.

Yakovenko also served as the company, developing it into the direction of a pedagogical nature. For such a large company, it is important to have a reserve of personnel of better quality than you can recruit on a street. Everything has gone to hell when the story of sea vacation with prostitutes, oligarchs and statesmen has seen the light. It costed dearly to Oleg Deripaska. He, and the county itself lost the aluminum industry.

Some enterprises of Sergey Yakovenko

In July 2017, Sergey Yakovenko, together with ‘Rusal-Sayan Foil’ (part of Rusal Group of Companies), established the ‘Alluminate company’, which specializes in the wholesale trade of lighting equipment. It seems to be a successful project, but we don’t know for sure.

LLC “Eco Center”, LLC ” STC “Navigator”, LLC Institute of Reproductive Technologies, LLC “Stroy Triz”, LLC “Intergen”, LLC “Top Property Group” are enterprises controlled either personally by Sergey Yakovenko, or by him in the company with Oleg Deripaska. Some of them are also engaged in state supplies.

The most interesting of these companies is Stroy Triz LLC, established on February 19, 2019. With ten thousand rubles as a foundation (it’s less than $15), but a hot team, it is going to be engaged in major construction projects. This is a joint brainchild with Oleg Deripaska. TRIZ is an acronym that has already been used in Rusal slang and means “theory of solving inventive problems”.

The official biography of doctor Sergey Yakovenko sounds quite funny with the background of a sex scandal. Sergey Yakovenko, professor, Russian biophysicist, embryologist, Ph.D., associate professor of the department of biophysics, the Moscow State University, General Director of the Altravita Clinic and vice-President of the non-profit association of Russian IVF Clinics – and such a shame as Nastya Rybka client.

The story seems to be repeating. There are rumors that Sergey Yahovenko and Oleg Deripaska were spotted in Montenegro. This time it was on a yacht full of working girls, just like Nastya Rybka in the good old days.