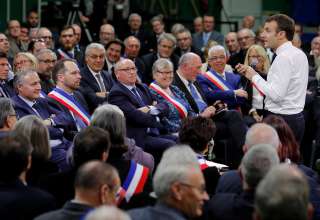 The “first losers of [a no deal Brexit] would be the British,” French President Emmanuel Macron said after learning about Tuesday night’s Brexit deal defeat.

Macron’s comments came as he neared the end of a 7-hour town hall meeting in Normandy, in which he shared his predictions for the UK’s next steps.

“I’m gonna tell you how I see things,” he said. “First option: they go towards a no deal so they say there is no agreement. It scares everybody. The first losers of this are the British people. So, in this context, they will have to – without any transition period – renegotiate a future relationship.”

Banking on the his second predicted outcome, the French president said he believed the British government would instead seek an Article 50 extension in order to renegotiate the deal ahead of second parliamentary vote.

“In that case, we’ll look into it, and maybe we’ll make improvements on one or two things, but I don’t really think so because we’ve reached the maximum for what we can do with the deal.”

But perhaps the most telling part of the address was his post script to the Brexit predictions.

The result of yesterday’s Commons vote, asserted Macron, “says a lot about what referendums, which seemed nice, can create. It’s a referendum that has been manipulated, manipulated from outside by a lot of what we call fake news, where everything and anything was said, and now they are being told ‘figure it out yourselves’. Result: it is not true. We (the Leave campaign) have lied to the people and what they (the public) have chosen is not possible. Good luck to the representatives of the nation who have to implement a thing which doesn’t exist and explain to the people: ‘you have voted on a thing, we lied to you. That’s what they have to go through.”