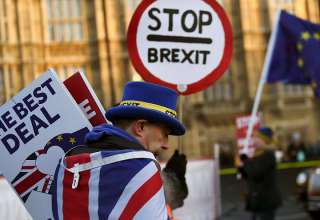 A cross-party group of British MPs are to present a draft law on Monday that would grant Parliament the power to delay Brexit and stop the country crashing out without a deal if Theresa May’s Conservative government is unable to get a Withdrawal Agreement approved.

Rebel MPs are also reportedly working on a seperate amendment to allow a small group of MPs to trigger a vote on Article 50 to prevent a no-deal Brexit.

Downing Street, which is to present its Brexit plan B on Monday after suffering the worst government defeat in British history over its Withdrawal Agreement last week, described both attempts as “extremely concerning.”

The Bill to be presented is sponsored by Labour MP and Home Affairs Select Committee chair Yvette Cooper.

It gives May until February 26 to get Parliament to approve a deal. Should she fail to do so — lawmakers rejected the Withdrawal Agreement last week by 230 votes — then Parliament could proceed to a binding vote on whether to extend Article 50 and by how long. This would prevent a no-deal Brexit.

The European Union’s top court ruled in December that the UK could unilaterally revoke Article 50 and thus stay in the bloc. However an extension of Article 50, to allow for another deal to be reached or for the UK to organise a referendum, would have to be approved by the 27 other EU member states.

Reports also emerged that some rebel MPs are working on an amendment to prevent a no-deal Brexit by allowing a small number of MPs to bypass government and trigger a vote on extending or revoking Article 50.

The secret motion, which was first reported on by Buzzfeed, is reportedly led by Conservative MP Dominic Grieve.

Grieve defeated the government with a previous amendment earlier this month, forcing May to unveil new plans for Brexit within three days of Parliament rejecting the Withdrawal Agreement.

Under this new amendment, 300 MPs from at least five different parties — including 10 from the ruling Conservatives — would be able to grab power from the government and table bills to be considered by Parliament regarding Brexit.

The 300 number is controversial because it is inferior to the current parliamentary majority of 320.

There are 650 MPs in the British Parliament but 11 do not vote including Northern Ireland’s republican Sinn Fein MPs — who protest British rule by not attending Parliament — as well as Speaker John Bercow and his three deputies.

“For centuries under the Westminster system, power has rested in majorities. Only a government with a majority can govern, and government means ability to control the parliamentary timetable.

“Grieve’s amendment would overturn this basic majoritarian principle,” she added in an opinion piece for The Spectator magazine.

Downing Street, meanwhile, condemned the two different attempts to ensure a no-deal Brexit is off the table.

“The British public voted to leave the European Union and it is vital that elected politicians deliver upon that verdict.

“Any attempt to remove the Government’s power to meet the legal conditions of an orderly exit at this moment of historic significance is extremely concerning,” a government spokesperson said.

Instead, it urged MPS to back its Withdrawal Agreement, saying that “this news should serve as a reminder to those MPs who want to deliver Brexit that they need to vote for it — otherwise there is a danger that Parliament could stop Brexit.”’