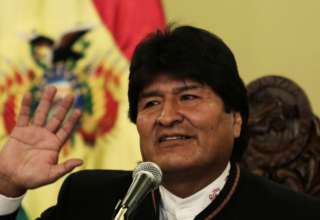 The presidential elections in Bolivia may have been won by Evo Morales in one round. The Bolivian election committee says that the current president has almost enough votes to prevent a second round. Opponents suspect fraud.

Last night the counting of the votes without explanation was suddenly stopped. It was already clear then that Morales had received more votes than the eight other candidates, but the latest results showed that a second round of elections would probably be needed.

Last night the election committee announced that Morales had received 45.3 percent of the vote, compared to 38.2 percent of former president Carlos Mesa. Then it remained silent. New results came today. With 95 percent of the votes, Morales stands at 46.4 percent and Mesa at 37.1 percent. It is still a so-called ‘quick count’. The official result is expected next week.

After the vote count had been stopped yesterday, tensions have risen in Bolivia. Both supporters and opponents of Morales took to the streets.

There are protests today too. Several news agencies report that groups have been hit in several places in the country. In the southern cities of Sucre and Tarija, the local building of the electoral commission was also set on fire. Mesa had previously warned that results could be manipulated to prevent a second round.

Morales claimed the victory yesterday. He has been the president of Bolivia for 14 years and this would be his fourth term. In previous elections in which he participated, it did not come to a second round either. Unlike in neighboring countries, Bolivia is doing well economically. The growth is estimated at 4 percent this year.

Although Morales receives a lot of credit for economic stability, many people are also dissatisfied with his presidency. In 2016, he lost a referendum to make a fourth presidency possible. Ultimately, the Supreme Court ruled that he could still participate in the elections.