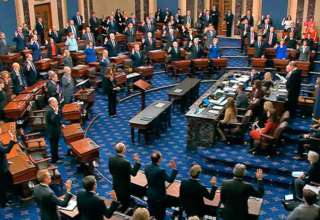 After months of negotiations, the US Senate has agreed to substantial investment in infrastructure. The $550 billion package is intended to improve roads, railways, bridges and internet connections. Together with previously approved investments, the total comes to about 1000 billion dollars.

It is the first bill since President Biden took office to be passed jointly by Democrats and Republicans. That is why it is seen as a clear victory for the president. 69 senators agreed to the plan, including 19 Republicans. Both parties have 50 seats in the Senate.

“Today we have proven that democracy can still work,” Biden said in a response. “We can do great things together, important things, for the American people.”

The approach of the American infrastructure is badly needed, because there is a lot of overdue maintenance. Twenty percent of the roads and about 45,000 bridges are in poor condition. Some bridges are even completely closed because they have sagged.

The electricity and water networks are also out of date and the internet is very slow in many places in America. The package also includes money for the greening of energy and homes in the United States.

After the Senate, it is now the turn of the House of Representatives to approve the plan. The Democrats have a majority there.