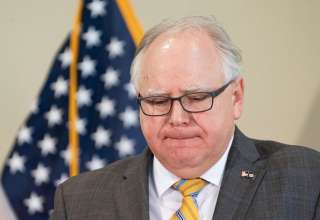 Minnesota is preparing 1,700 military personnel to intervene in mounting protests following the death of black George Floyd on his arrest. Governor Tim Walz of the US has announced that.

Walz previously ordered a temporary curfew for the cities of Minneapolis and St. Paul after three nights of protests in the metropolitan area. “Our state is in chaos,” he said on television Friday evening. This is “an unprecedented threat to our state.”

The curfew for Friday and Saturday is from 8:00 PM to 6:00 AM in both cities. Security officials and first responders are exempt from the restrictions, as are those fleeing from danger or the homeless.

“We try to use all the tools we have” because rioters “aim to do as much damage as they can,” said the governor. He added that the turmoil must be overcome before the community is able to tackle problems, including “systemic inequalities and discrimination” that led to Floyd’s death. “We have to end this chapter first to get to the other.”

After violent protests against police brutality, a state of emergency has been declared for the US city of Atlanta in the state of Georgia and other cities in the surrounding area.

About 500 National Guard members will be deployed to protect people and property, Georgia’s governor Brian Kemp wrote on Twitter on Saturday morning.

According to media reports, Atlanta Mayor Keisha Bottoms had asked for the measure after violent protests following the death of black George Floyd. Protesters attacked CNN headquarters on Friday, among other things.

The channel showed live images from its own headquarters, showing demonstrators throwing objects from outside to police officers at the entrance of the building. A photo of a burning car was shown on the website of the local broadcaster WRCB TV.

George Floyd, 46, died on Monday after a brutal police deployment in Minneapolis. Fired white police officer Derek Chauvin was arrested Friday afternoon in connection with Floyd’s death and charged with murder and manslaughter.